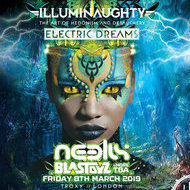 By illumiNaughty,
May 15, 2018 in Party Announcement